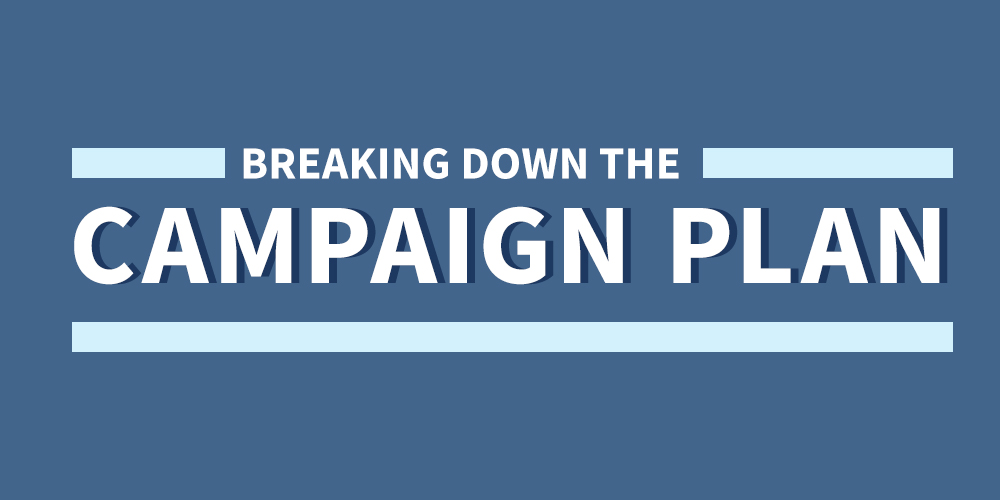 Your organization is preparing to launch a campaign – that’s exciting! But are you wondering how you can possibly coordinate and sustain a complex, multi-year, large-scale fundraising effort to achieve a successful result? That’s where your campaign plan comes in.

What is a Campaign Plan?

A campaign plan is a living document that guides the ongoing strategy and actions of all staff and volunteers who are driving the campaign. It includes all important data and information for the campaign. Some of the basic elements that should be included in your campaign plan are:

Why Write a Campaign Plan?

A well-crafted campaign plan lays out the specifics of how to proceed and who will be responsible for what tasks. It also prepares you to face both anticipated and unforeseen challenges. Your campaign plan will:

How to Start Writing a Campaign Plan

Who Should Write the Campaign Plan?

Drafting your plan provides the opportunity to bring together and seek input from the key players and constituencies who will drive the campaign:

Increasing the diversity of voices and perspectives you include will help you craft a strong campaign plan.

Some organizations formalize the process by putting together a campaign planning task force focused on ensuring that preparation for the campaign is thorough and complete. (Many of the members will go on to play key roles in the campaign, especially because of their participation in the planning process.)

Your campaign plan will not be helpful unless you actually use it as a resource and road map! There should be a master copy of the document saved on a drive that all key players can access, so that everyone is working from the latest version. There is no substitute for everyone having the same information at the same time.

It is important to identify a Campaign Manager who can focus on coordinating the campaign’s operations, including overseeing the execution of the campaign plan and monitoring of progress. The campaign manager may be a professional development officer, the chief executive officer (where there is no development officer at the institution), or a volunteer. Given the many and diverse responsibilities of the CEO, especially during a capital campaign, it is most valuable to have someone else serve as the campaign manager if possible.

The Campaign Executive Committee should meet regularly to review progress against the goals and timetable set out in the campaign plan and make adjustments as necessary. It is the responsibility of the Campaign Manager to coordinate that process and to make certain that all necessary and relevant information, including the latest input from staff and volunteers, is assembled for those meetings.

Future Benefits of your Plan

By the end of the effort, your campaign plan will probably will constitute the single most complete record of the campaign’s activity and accomplishments. Thus, it also will serve as a history for careful study and continuous reference the next time your organization decides to undertake a comprehensive or capital campaign.