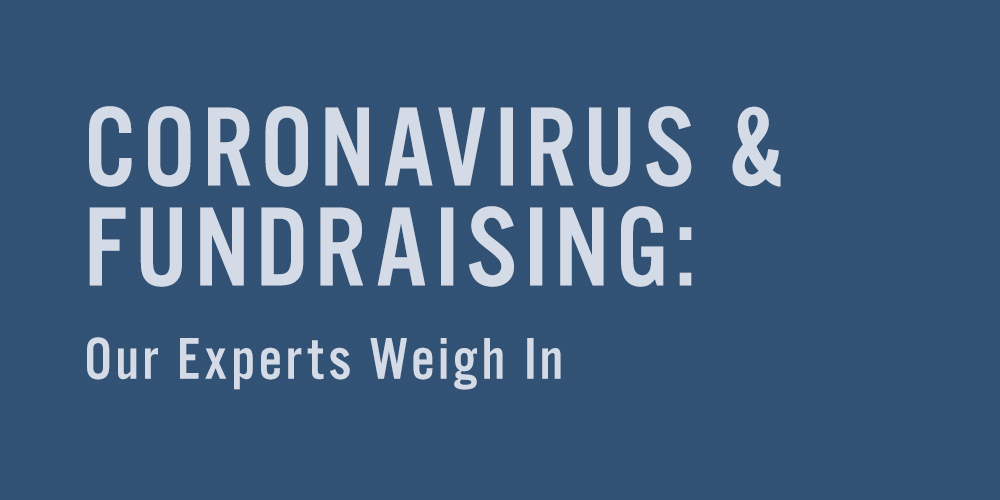 As the number of novel coronavirus cases in the U.S. continues to climb and markets react, many nonprofits are wondering what the impact will be on their fundraising programs. TW&B’s consultants – many of whom ran campaigns and large-scale fundraising programs during the last financial crisis – offer their advice.

Include Your Donors in Your Crisis Communications

Nonprofits that run facilities that host performances or gatherings of any size are wisely communicating with their members and beneficiaries. As appropriate, be sure to include your donors and your volunteers.  Meagan Downey says, “Donors have a stake in your response to the crisis too. Demonstrating that you have a plan to protect the community builds trust and can serve as an important educational tool about the specific impact of the emergency for your organization.”

She also notes that there are a number of helpful crisis communications tool kits online. BoardSource offers a short, but informative guide for board members who may be interfacing with external audiences.

The most immediate impact of the coronavirus on fundraising is on events and gatherings. Now is the time to do a cost-benefit analysis to determine whether upcoming events should be postponed, held remotely or canceled entirely. It’s also a good time to review contracts with vendors and review (or purchase) insurance policies for all of your scheduled events. The CDC has provided guidance for all event planners to prepare for the possibility of outbreak.

Nora Kyger says, “Even before this crisis, some organizations had tried a virtual gala - recognizing that folks were getting tired of the big events. They raised as much money as they would have anyway!”

It can be easy to panic and focus on the short term, but taking a more strategic approach pays off. Marilyn Foster Kirk notes that “In 2008-2009, we focused on maintaining relationships with all of our donors. We also reviewed our portfolios to identify donors who weren't currently major gift prospects but who needed additional cultivation and qualification to move them toward becoming major gift donors.  They weren't ready to be asked for major gifts at that particular moment, but we wanted to be moving them toward that possibility when the time was right -- both their time and when the economic environment was more favorable.”

June Poust encourages fundraisers to not to lose sight of the ultimate goal. She shares, “I was at a large university which held its $100M campaign kick-off dinner the day after the 2008 market crash. The keynote speaker was exhausted and a little grim, but he ended his talk by stating his confidence in the school’s future, and announced his lead gift to name the finance center.”

“He celebrated the impact the school has made and the importance of the campaign. He talked about the fact that the economy will get over this, that the school will survive and thrive -- and that it has!  He received a thunderous round of applause as he left to get on a plane to join a special task force with economists in Washington. Bottom line -- this too will pass.”

Take Stock of Your Financials

It’s important for fundraisers to understand the organization’s financial position, and be able to  confidently address questions related to fiscal health. Questions pertaining to operating reserves, days cash on hand, or investments may be more significant at a time of uncertainty.

You might also need to be flexible in your approach to pledges. Betsy Soete remembers, “In the years following the financial crisis, the university I worked for offered some flexibility in pay-out schedules for those who were paying (or contemplating) pledges over time. Many donors appreciated the conversations and the more flexible approach to pledges — and yes, we finished their campaign on time and over the goal!”

Now more than ever, nonprofits need to make their donors feel connected to the mission of the organization.  “We found that increased donor stewardship, not just for individual donors but for foundations, helped to keep giving stable during the last downturn. Make sure that everyone who contributes to your nonprofit understands how valued and important their gift is,” notes Amy Funk. “Doing an annual letter that outlines the impact of your contribution is a great place to start if you aren’t already doing one,”

Nora Kyger adds, “Keep educating folks about your programs and the impact they have. Let them know their past gifts were appreciated and useful, and don't be afraid to ask for that next gift. If your campaign, annual fund, or major gift opportunity was urgent and inspirational before, it still will be today.”

Feeling like you could use some advice to decide what’s right for your organization?  TW&B can help. Connect with one of our senior-level consultants here.

Leadership Transitions: 3 Steps to Set Up New Leaders for Success

How to Fundraise as an Ally