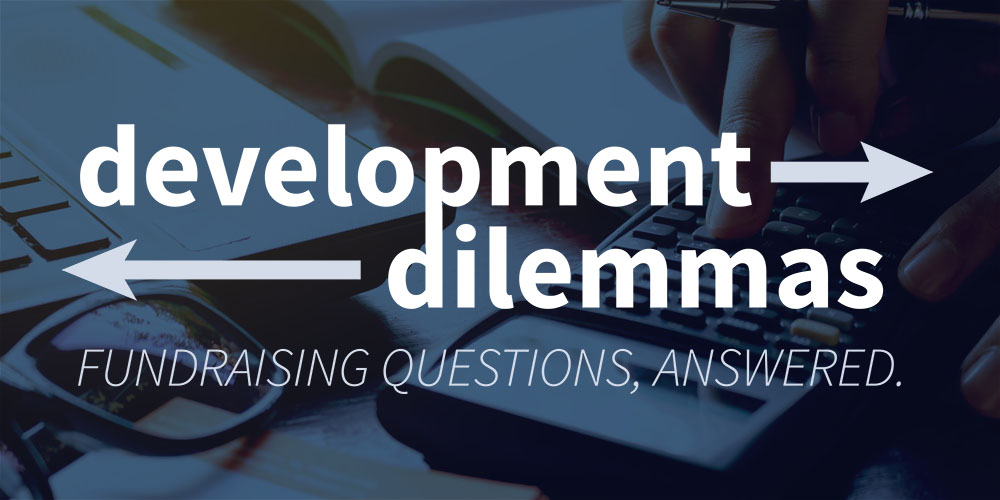 In our weekly column, consultants with decades of nonprofit experience answer your questions about fundraising, boards, strategy and more. To ask a question and be featured (anonymously!) in the column, email your questions to info@twbfundraising.com.

This week’s question will be answered by Jon Heintzelman.

How can my organization give recognition to planned gifts in a campaign? Should they be included in determining our progress toward our goal?

There is a great variety in how institutions handle the issue of counting and recognizing planned gifts in a campaign. Several decades ago, it was not entirely unusual for planned gifts to be entirely excluded from any counting or recognition in a campaign. Perhaps in some cases this is still true, particularly if the campaign is purely for capital or facility purposes. With comprehensive campaigns, which include program and operating as well as endowment in addition to capital, it is still possible that the campaign decision makers will dictate that planned gifts are not to be counted or recognized. Often, and I believe in most cases, these decisions are founded in the mistaken assumption that those who are making planned gifts could and should be making outright gifts as well or in place of the planned gifts, since outright gifts can be employed immediately for the purposes of the campaign without needing to wait for a period of years or someone’s passing to be able to actually realize the gift. This is not always a possibility for donors making a planned gift.

A corollary to this assumption is that by allowing planned gifts to be counted and recognized in a campaign, the institution is encouraging certain donors to take the easy way out. Nothing could be further from the truth. The reality is that most planned gifts prospects and donors are not good prospects for a significant outright gift; the rational choice, therefore, with regard to campaigns should be strategic inclusion since this offers the greatest opportunity to include as many potential prospects, both outright and planned, in your campaign prospect pool.

The process of actually counting planned gifts in a campaign can also vary greatly between institutions and campaigns. There really is no universal standard. I recommend keeping the counting guidelines as understandable and simple as possible. CASE guidelines provide for counting bequests at full value or 100% where the age of the youngest donor is at least 70. For donors younger than 70, one option is to say that the youngest donor needs to be at least 50 years old for the bequest to count at all; then if you count a bequest at age 50 at 60% of value, every year between ages 50 and 70 is an increment of 2%. For example, a bequest from a donor aged 60 in this model would be counted at 80% of current value. I favor this model because it is easy to explain and understand. I realize that many campaigns set the counting age(s) at different levels – there really is no right or wrong, although adopting some sensible minimums and maximums for the ages must be done. Irrevocable planned gifts or life income arrangements can be included at face value and also at the discounted charitable deduction value so that both values can be displayed in the campaign reports – life income plans where the youngest donor is less than 50 years old wouldn’t be counted at all.