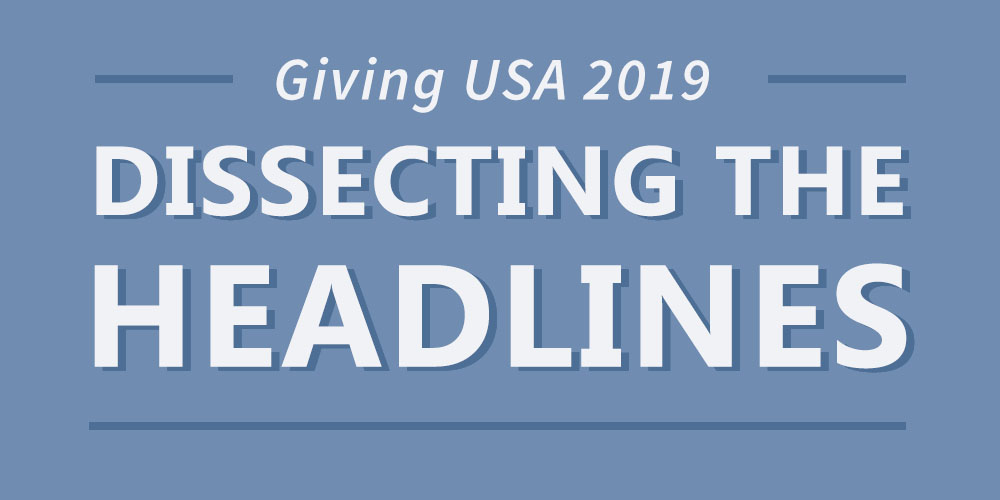 When it comes to giving, ultra-high net worth philanthropists and their mega-gifts grab the spotlight. Not long ago million-dollar gifts made the headlines. No longer. Now it’s multi-million- and billion-dollar gifts. In fact, two gifts larger than one billion dollars stole the Giving USA headlines a year ago, credited with pushing total charitable giving past the $400 billion mark for the first time.

However, when the Giving USA annual report for 2018 was released, there was no chronicling of shattered records of headline grabbing gifts cited—just the announcement of a mere 0.7% increase, expressed in current dollars. In fact, the Chronicle of Philanthropy highlighted a decline based on inflation-adjusted dollars and ran this headline: “Gifts to Charity Dropped 1.7 Percent Last Year”.

What a difference a year makes!

To be clear, total giving in 2018 ($427.71 billion) actually surpassed the record-breaking total of 2017 ($410 billion) when reported in current dollars. It’s the rate of change, however, that has people wondering what these numbers tell us about charitable giving in the United States.

Experts attempting to explain the 2018 results say, “it’s complicated.” In addition to the complexities of donor behavior, they point to several possible environmental influences that may have dampened the rate of growth in giving, such as early effects of tax law change, volatility in the stock market at year’s end, and uncertainty about the economy in general. In addition, there were two, billion-dollar-plus gifts in 2017 that weren’t repeated in 2018. Plus, there was significant charitable support for several natural disasters in 2017 that wasn’t the case in 2018.

We need more time to know whether 2018 is a bellwether year of some sort, presaging a slowdown, or whether it is just a blip in an otherwise longer-term upward trend.

Another negative statistic in the headlines this June was the decrease in individual giving as a percent of total giving. It dipped to 68% in 2018, falling below 70% for the first time since 1954. That said, giving by individuals remained the largest single source of charitable dollars in 2018 totaling $292 billion and exceeded the $286.65 billion reported for 2017.

Let’s take a look at two possible explanations for this.

Further, Foundation Source tells us that, in addition to strong contributions from individuals, foundation asset balances have increased as a result of stock market performance while grant disbursements have remained stable, contributing factors in the growth of foundation giving totals.

2. The percent of total giving from corporations and bequests hasn’t changed much, 9% and 5% respectively for each of the last two years.

When these two sources remain stable and the amount from foundations grows, it’s a statistical reality that the percent attributed to individual giving will decrease.

So, questions remain as to what these descriptive statistics mean. As the experts say, it is complicated. And it is complex because so many factors influence the human behavior of charitable giving. We will need a couple more years’ worth of data to know whether or not giving statistics in 2018 were pointing toward something significant.

There are, however, some concerning trends in individual giving behavior that are hidden beneath these macro-level data points. We'll cover those in next week's piece, Giving USA: Uncovering the Hidden Numbers.