For all of us who work at TW&B, spending time on a client’s turf is essential. On site visits, personal meetings, and any other form of direct interaction with the real-life places in which our clients operate is critical for us. This interaction is key for us to shape a case for support, discover fundraising challenges and opportunities, and to develop a plan to advance each organization's mission. In the case of TW&B client, Cofan Survival Fund (CSF), the "turf" is 1 million acres of the Amazon tropical rainforest in Ecuador, for which the indigenous Cofan Tribe has legal management authority and in some cases, legal title.

TW&B was hired by the CSF to establish an individual giving program. Part of my initial strategy in putting together a fundraising plan was to travel 3,200 miles from Chicago to Zabalo, Ecuador and see for myself how private support to the Cofan people enable them to preserve the rainforest. 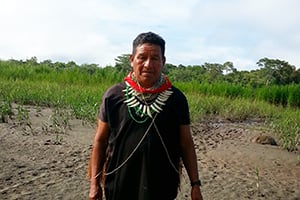 The Cofan Tribe has existed for several centuries primarily in Sucumbíos Province of northeast Ecuador. In the last 40 years, their land has been significantly encroached upon and damaged by individuals and corporations who engage in illegal activities such as logging, mining and oil exploration. The Cofan Survival Fund was established in 1999 as a U.S. based non-profit organization that funds the conservation efforts of the Cofan people to combat this encroachment and to preserve the tropical rainforest. Funds raised support the Cofan Park Rangers--a trained and equipped force of Cofan men and women who each spend a month at a time living in the tropical rainforest, mapping boundaries and working with Ecuadorian authorities when violators are discovered.

In June, I began an engagement with the CSF and had the opportunity to travel to Ecuador to see the work of the CSF and its Executive Director, Randy Borman. Unfortunately, Randy's work during my trip included organizing a response to a massive oil spill on the Aguarico River that occurred during my visit. The Aguarico runs through Cofan territory and the Cofan rely on it for food and drinking water, as well as for bathing and washing clothes. (More on the oil spill later). 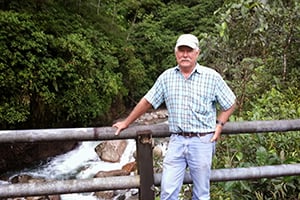 Randy Borman’s story has been told in several books and documentaries. The son of Chicago-based missionaries working with the indigenous people in the 50s, Randy was born in the tropical rainforest and grew up among the Cofan. He speaks the Cofan language in addition to Spanish and English (he sounds like a Chicagoan) and while recognized as a “gringo” is also recognized by the tribe as a Cofan as evidenced by his past election as tribal chief. He lives much of the time in Zabalo, Ecuador with his Cofan wife, Amelia, and sons Felipe, Joshua and Jeremiah. A fourth son, Federico, is finishing his degree in international business at North Park University in Chicago.

Randy has been very successful in securing grants to the CSF and its Ecuadorian sister non-profit, the Fundación Sobrevivencia Cofán. Funders include the Field Museum, the Gordon and Betty Moore Foundation, Edwards Mother Earth Foundation, the Nature Conservancy, the MacArthur Foundation and USAID.

The primary fundraising challenge of the CSF was a product of Randy’s past fundraising success with foundations. As foundation giving priorities began to shift away from conservation efforts, the organization did not have a strategy in place that would secure gifts from individuals. The need to develop an individual giving strategy led the CSF board to contract TW&B.

My site visit began in Quito, the capital of Ecuador, at the Cofan's Quito Communication Center (QCC), where the CSF administration operates. There, they manage government relations, house Cofan children who attend school in Quito and where they train the Cofan Park Rangers.

During my time in Quito, I was able to see the massive floor to ceiling map of Cofan territory in the QCC and take video of Randy explaining the specific environmental threats to the multiple, non-contiguous blocks of land under Cofan stewardship. The video documentation of Randy's explanation has proven to be a critical resource for me when developing solicitation and proposal materials, something I could have never achieved by phone or over Skype.

The primary objective of my trip was to visit areas protected by the Cofan Rangers and Zabalo, Ecuador, the village in the Cuyabeno Wildlife Production Reserve, where Randy and his family live. Our journey took us down the Andes through the cloud mountain where I witnessed the breath-taking magnificence of the region. We travelled from Quito by car to some of the areas where the park rangers patrol, such as the La Bonita Municipal Reserve and the Bermejo Ecological Reserve. In the Bermejo Reserve, Randy and I found an example of a trolley system used by those engaged in illegal logging to remove the cut lumber from the forest. When such a system is discovered by the rangers, they contact the appropriate authorities to remove the illegal infrastructure.

Before we reached Lago Agrio, the provincial capital, Robert Aguinda, a CSF staff member and President of the Cofan Federation called Randy to inform him that a nearby oil pipeline had broken and thousands of barrels of oil were spilled into a tributary to the Aguarico River. When we arrived at the site, the Ecuadorian military had limited access to the spill location and was preventing people from taking photos and video. However, it was easy to see the effects of the spill as we drove across the bridge. A thick sludge of more than six inches of bubbling crude rode the stream; the edges were black with crude.

Because Zabalo is only reached by boat, we were prepared to ride in a canoe with outboard motor for three-hours. We hadn’t prepared for seeing the Aguarico river channel heavily marbled with huge streaks and swirls of petroleum; nor did we prepare for the air to reek of oil. We finally got ahead of the oil-streaked water and arrived in Zabalo, but we knew the oil was coming. It would require organization from the Cofan to be sure the oil company would agree to manage the spill and provide water and food safe to consume to the people along the river until naturally-occurring bacteria could go to work on the spill and eliminate the obvious signs of contamination. 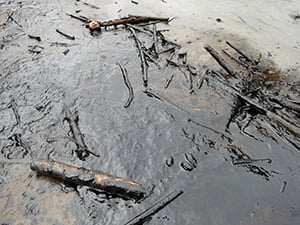 The Aguarico River after the oil spill

While the ecological disaster distracted Randy and eliminated my chance to witness an unspoiled tropical rainforest, ironically, it provided me with a firsthand experience to see the work of Randy Borman and the Cofan Survival Fund, which was the purpose of my trip. While some threats such as illegal logging, mining, fishing and hunting can be prevented by the Park Rangers, it is as important to the Cofan people and the environment for the indigenous people of Ecuador to be organized so they may launch an appropriate response to these inevitable disasters. “I know Ecuador needs oil,” Randy told me. “It’s critically important to the Ecuadorian economy. But, when the oil companies create a disaster, they must be held accountable.”

The site visit was both personally enriching and professionally essential to understanding the organization. As I now work with Cofan board members, my visit enables me to better develop messaging and fundraising strategies and offers me credibility to generate support from potential major donors, many of whom have travelled to Ecuador and Zabalo themselves. When I recently attended a Cofan Survival Fund cultivation event in Seattle that we organized based on information gleaned from Randy on my visit, I met with four individuals who travelled to Zabalo in the 1980s and 1990s. We were able to discuss our shared experiences and I was able to contextualize their perspectives, deepening my appreciation for the passion people have for the preservation of the tropical rainforest.

The visit and the product of the work Randy and I accomplished together is a reminder that fundraising is, ultimately, about human relationships. Despite the advances in technology that help us communicate via satellite phones, email and video chat, there is no substitute for spending time face-to-face with our clients and the network of people that their organizations impact. The world is a very big place, indeed, but when we bridge distance and sit down with our clients, whether in a meeting room in Chicago, or in a house in the Amazon rainforest, our focus is sharpened and our work takes on a depth and richness that ultimately helps to create effective, successful strategies and advance our clients’ missions.