Giving in the United States has reached its highest level ever, surpassing the previous high in 2014 and the levels seen prior to the recession. According to their annual report released today, the Giving USA Foundation estimates that total giving reached $373.25 billion in 2015. This is the highest total since the report began in 1974, in both actual dollars and after adjusting for inflation.

In 2015, giving increased by 4 percent from 2014 after adjusting for inflation. Increases were seen across every giving source for the second year in a row, including individuals, estates, foundations, and corporations. Individual giving, the largest source of giving at 71 percent of the total, contributed an estimated $264.58 billion, which is a 3.7 percent increase from the  inflation-adjusted total in 2014. Giving by foundations, which totaled at  $58.46 billion, increased by the largest amount of any source, at 6.3 percent after adjusting for inflation.

Growth in charitable giving can be attributed to continued economic stability after the recession both nationwide and at the household level. Giving as a percentage of the GDP was at 2.1 percent, the same as we saw in 2014. This is higher than the 1.9 percent seen during the recession, but lower than the 2.2 percent 40-year peak.

The Giving USA report breaks recipient types into nine subsectors: religion, education, human services, foundations, health, public-society benefit, arts and cultural institutions, international affairs, and animals and the environment. Of the nine subsectors designated by Giving USA, the only to see decreases was giving to foundations.

The largest increases in giving were in international affairs, education, and arts and cultural institutions. Giving to human services has increased annually since 2006. Education also achieved its record high at an estimated $57.48 billion.

Giving USA 2016: The Annual Report on Philanthropy for the Year 2015, a publication of Giving USA Foundation, 2016, researched and written by the Indiana University Lilly Family School of Philanthropy.  Available online at www.givingusa.org. 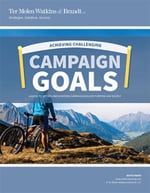 When planning a campaign, you'll need to consider the various areas of need within your organization, and also determine where it's all going to come from. This guide will help you set challenging fundraising goals that fit your organization's needs and resources.