Outside In: Paint for Peace

The new exhibition “Outside In: Paint for Piece” from our client COCA (Center of Creative Arts) shows the resilience of a community reeling from violence and protest. This collaborative community exhibition displays murals of hope, unity, and renewal in a time when the Ferguson and St. Louis community needed them the most.

In August 2014, the shooting death of black 18-year-old Michael Brown by a white police officer in Ferguson, Missouri triggered weeks of protests in the St. Louis area and across the country. After a St. Louis County grand jury announced it would not indict Officer Darren Wilson that November, protests broke out again and many Ferguson businesses were destroyed by vandalism. 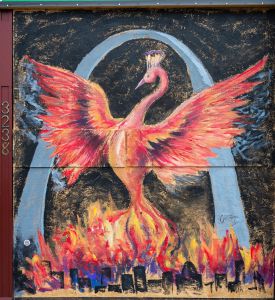 In the aftermath, neighborhood leaders met to discuss cleanup. They started the Paint for Peace initiative in Ferguson and St. Louis. Artists were invited to paint boarded up windows to bring hope and renewal back into the community. Word spread through social media, and at least 350 artists created around 250 images throughout the community.

Now, nearly two years later, Center of Creative Arts (COCA) has collected 21 of these pieces for their exhibition “Outside In: Paint for Peace”. COCA is a leader in arts education in St. Louis, serving more than 50,000 people of all ages and backgrounds in dance, music, theatre, art, design, and more.

“The arts play an important role in helping people process major change and giving voice to complex issues. We hope this exhibition will provide a means to foster conversation in our community,” said Kelly Pollock, COCA Executive Director. “As COCA celebrates 30 years of connecting St. Louisans to the arts, we’re excited to launch our gallery season with this powerful collaboration.”

The new exhibit, which incorporates programs and events from August 27 through November 19, shows the power of art to create conversations and rebuild community. The art will be displayed in galleries, museums, and cultural centers across St. Louis and Ferguson. COCA will also offer educational programs including in-school residencies, field trips, and a professional development workshop to engage students, teachers and families. 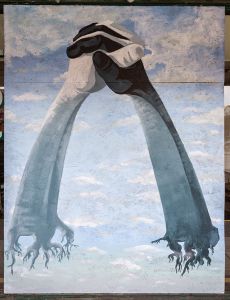 “Taking art into the street created a social diary and provided people of all ages an outlet for raw emotions and a way to express their concerns. They navigated their reactions and views in the days and weeks following the protests,” said curator Jacquelyn Lewis-Harris. “This exhibition is meant to both conserve and preserve these meaningful works of art – ranging from simple drawings of love and peace to challenging calls for social change. We hope to provide historical and technical context and allow the works of art to be preserved as part of the growing international canon of graffiti art.”

The community of Ferguson continues to recover, and the Paint for Peace messages of love, peace, and social change are as important as ever today. As protests have continued to break out in the past two years, there are an increasing number of towns like Ferguson across the country where communities are in conflict. In this tumultuous climate, nonprofits are challenged to address the real issues that impact the world in a way that aligns with their mission. At Ter Molen Watkins & Brandt, we’re proud to support the work COCA is doing to use artistic expression to address the needs of the community and foster challenging conversations.

Learn more about COCA’s “Outside In: Paint for Peace” here.