“I want the sky to land here, to cool it, and make it well again.”

This wish was the inspiration behind Yoko Ono’s SKYLANDING, her first permanent sculpture in the Americas, located in Chicago’s Jackson Park.

The sky has held a deep significance for Ms. Ono since her childhood. In the spring of 1945, she was sent to the Japanese countryside to escape the bombings of Tokyo during World War II. There was a food shortage, and she and her brother, Keisuke, would lie down and imagine menus in the sky that might nourish them back to strength. Since then, Ms. Ono has seen the sky as a source of hope, comfort and healing.

SKYLANDING is comprised of twelve brushed stainless steel lotus petals that radiate outward. The sculpture is a public work designed to be interactive, with the petals spread to encourage onlookers to walk inside. The participation continues on SKYLANDING.com, which invites visitors to share their own wishes with the world.

At the October 17 dedication ceremony, she described the sculpture as the “place where the sky and earth meet and create a seed to learn about the past and come together to create a future of peace and harmony, with nature and each other.”

Ter Molen Watkins & Brandt worked with our clients at Project 120 Chicago to bring Ms. Ono’s vision to Chicago. When Yoko Ono first visited Chicago in the 1970s, she stayed in a hotel with a view of the lake. She was inspired by Lake Michigan when writing the song “Walking on Thin Ice.” This was the last song John Lennon worked on, which they completed recording on the day he was killed.The companion piece to SKYLANDING is the “Mended Petal,” a 13th petal located at the Art Institute of Chicago. The petal is symbolically repaired with a seam in the Japanese tradition of kinsugi, the art of repairing broken pottery with laquer dusted in gold, silver, or platinum. The tradition treats repair as part of the history of the object, using damage as an opportunity to make the piece more beautiful.

“Chicago makes me nostalgic about way, way back when I was a little girl in the 1930s. I don’t really know why. But there seems to be a strong connection between me and Chicago,” Ms. Ono has said. 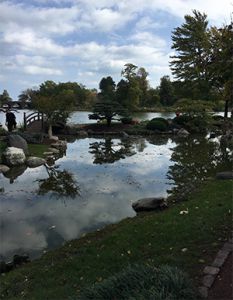 The site also has ties to Yoko’s Japanese heritage. The SKYLANDING sculpture is located on the Wooded Island in Jackson Park, on the former site of the Japanese Phoenix Pavilion during the 1893 World’s Columbian Exposition in Chicago. The Phoenix Pavilion showcased Japan’s artistic achievements for the first time in the United States. Today, the Wooded Island is home to the Osaka Garden, a Japanese garden with a gazebo, footbridge and waterfall.

The sculpture is a short walk from the Museum of Science and Industry and is across the street from the site of the planned Barack Obama Presidential Center. The construction of SKYLANDING is part of Project 120’s partnership with the Chicago Park District to restore and revitalize Jackson Park. We’re honored to be a part of the effort to recognize and grow the rich cultural heritage of Jackson Park that brought this inspirational piece of art to the Chicago community.