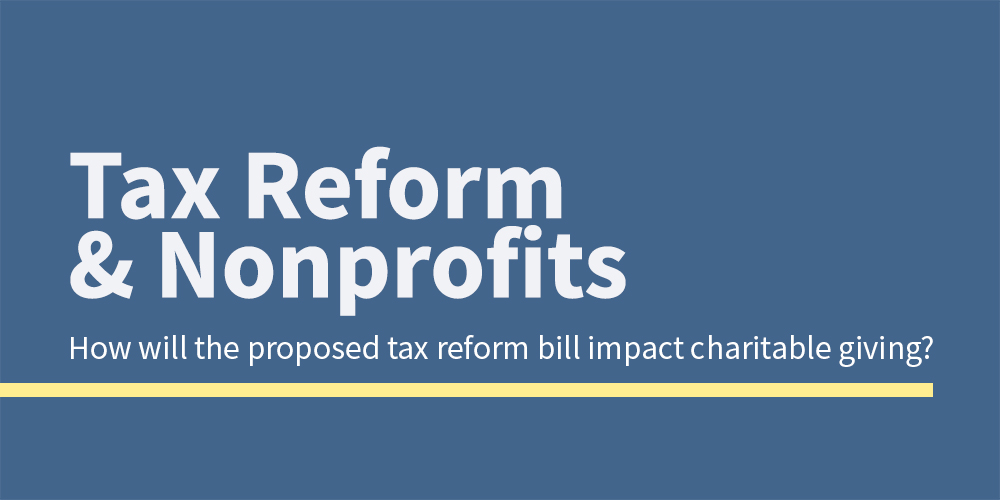 At the time this is being written, the final tax reform bill has not yet been finalized with different versions in the House and Senate; however, several aspects of the proposed Tax Cuts and Jobs Bill seem likely to end up in whatever final version can be fashioned and approved. These proposals ought to raise alarm bells for charities of all kinds. The following current proposed tax changes will likely impact the decisions of prospective donors in the future.

The standard deduction may nearly double. It is estimated that this will likely increase the percentage of taxpayers using the standard deduction from 70% to approximately 84%. Put another way, it would decrease by approximately 50% those who itemize their deductions and who, up until now, could include qualified gifts to charity as a deduction on their tax returns. This would eliminate the tax benefit of charitable giving. We recognize that charitable intent is still the strongest motive in charitable giving; nonetheless, the absence of any tax benefit as a result of the gift is certain to have an overall negative impact on giving.

Both House and Senate versions of the proposed bill reduce or eliminate the deduction for state and local taxes (SALT). The current House version caps this deduction at $10,000  for property taxes while the Senate version just eliminates this item for inclusion as a deduction. As with the increase in the standard deduction referenced above, the lowering or elimination of the SALT deduction would likely further drive down the percentage of tax payers who will itemize their deductions in the future and, accordingly, reduce the number who will be able to itemize their charitable gifts.

The proposed changes to the estate tax would impact the decision making of prospective donors with significant estates. Under current law, there is an exemption from federal estate taxes of up to about $5.5M for single individuals and about $11M for married couples. Estates valued in excess of these exemptions are currently subject to a federal estate tax. The federal estate tax laws allow an unlimited deduction for estates passing assets on to a spouse or to a qualified charity. Estate gifts to others, such as children for example, are subject to the tax. Elimination of this tax would allow wealthy individuals to pass on unlimited assets to individuals beyond a spouse without the impact of estate tax. This aspect of the bill is being “sold” as a boon for farmers and small businesses, while the reality is the vast majority of them are not impacted by the current law. Therefore, it would be possible to carve out an exception or increase the exemption so that these entities are virtually eliminated from exposure while at the same time retaining an estate tax that would apply only to the truly wealthy.

Although both House and Senate versions preserve the income tax charitable deduction, there are structural disincentives embedded in these bills that will negatively impact the incentive to give. At the same time, the elimination of the estate tax will also eliminate the impact of charitable giving through one’s estate, particularly for more wealthy prospects.