Who did you include in your last planned giving mailing? If you just mailed to the usual list of donors, chances are you’re missing out.

Our clients North Park University recently completed the most successful campaign in its history. While performing our post-campaign assessment, we examined all of the bequests they’d received during the campaign. We wanted to see to what degree past giving is an indicator of future likelihood of receiving a planned gift, and if there was a relationship between the amount of historical giving and the size of the planned gift.

Using a traditional gift pyramid as a guide, one might assume that prospects with a history of giving larger and larger gifts are those most likely to incorporate the institution in their estate plans.  Many of us know, however, that it is usually better to target a base who gives a continuous but modest amount over a long period of time. We often call these donors “Savers” because they prefer not to give large outright gifts. 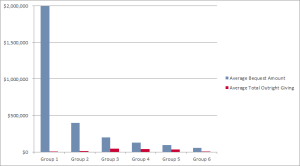 That’s what happened at North Park. We divided the bequests into 6 groups of 9 or 10. Group 1 gave the largest 10 gifts, while group 7 gave the smallest 10. We saw that the total outright giving and outright gift sizes both declined as the bequest sizes went up.

But when we looked at Group 1, the largest 10 gifts, we saw some things we didn’t quite expect. Among the group of the ten largest bequest donors, only three had ever given more than $1,000. In fact, two of them had never given anything before! These donors, whom we labelled “Super Savers”, appeared to have saved the vast majority of their philanthropy for inclusion in their estates. 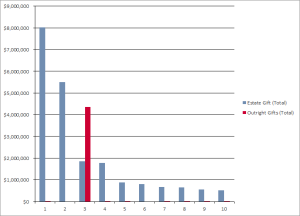 Another interesting discovery was the fact that most of the donors were not regular donors. Many development programs tend to focus on regular, loyal donors to market planned giving. Of the 10 estate gift donors, 8 of them had given only 3 gifts or less during their lifetimes.

These discoveries turn traditional prospect identification on its head yet again. You can’t select only your best donors, large or small, to market planned gifts. So, with that in mind, how do we get our message to these “Super Savers” and maximize planned giving?

Many organizations are cautious about spending money on planned giving. We understand why – there are often few funds to go around. It’s tempting to be cautious, making small efforts to test the waters.

The problem with this method is that a good planned giving program takes persistence and dedication in order to work. But if you’re not really committing, you’ll have poor results. This may lead you to falsely conclude that planned giving doesn’t work for your organization.

But by its nature, planned giving will not be quick. I’ve met with planned giving donors who held onto mailings that we had sent years before! We may not have received an immediate response, but our efforts were definitely successful. That’s why persistence is essential.

2. Identify non-donors who could be engaged in your cause.

Universities like North Park have a pool of alumni. Healthcare organizations may look toward grateful patients. But apart from buying lists, many organizations struggle to build a large database that includes both donors and non-donors alike. It is challenging for many of us to figure out who might be interested in our cause but are not ready to give large outright gifts.

Consider how you can enhance your current marketing initiatives to help build an audience for planned giving messages. Keeping in touch with volunteers is a great place to start. Volunteers may not be currently in the position to give but may consider an outright gift, joining the annual fund, or making a planned gift sometime in the future.

Event registration and creating subscription content can also help you build a database for future planned giving mailings. Make sure you’re practicing good stewardship and using permission marketing so people can tell you that they’re still interested in your cause, whether they’ve given money or not.

Now that we know that we can’t just send our planned giving information to our largest donors, or even just modest but loyal donors, we know we’ve got to send to a much larger group. After all, if we just send to these groups, we may not be reaching “Super Savers” who will give the largest gifts.

In order to better target your marketing, it seems logical to focus on older individuals. Universities start with graduation year, but some organizations don’t have age data. Research tools and wealth screening data may be able to help you segment your database by age.

But you can’t assume that most people considering planned gifts are 65 or older. With a tumultuous economy, people are planning for retirement and writing their wills earlier than before. One organization I’ve worked with received the largest number of responses to planned giving marketing from people in their 40s and 50s.

4. Try a variety of approaches to get your message out.

In order to be donor-centric, you have to be aware that not everyone prefers the same methods of communication. While some people may prefer to hold physical materials in their hands, others will respond better to email and digital communications.

Tailoring your message is also important. Some people may be compelled by materials that make a strong case for your organization, but others may be drawn to materials that take a financial planning approach.

Email marketing tools are powerful these days. Open and click data can tell you a lot about how responsive people are to certain types of messages, and may give you a clue as to who might prefer physical mail. Try a wide array of methods and use data to help you analyze what works, and with whom.

When making any changes to your planned gift program, the best place to start is by looking at your own data. If you notice large bequests from small donors, infrequent donors, or even from non-donors, it may be a sign that you need to adjust your planned gift marketing strategy.

Leadership Transitions: 3 Steps to Set Up New Leaders for Success

How to Fundraise as an Ally

6 Things to Know Before Automating Your Donor Outreach