Positioning Your Organization for Growth Post-Recession

When the Great Recession hit in 2007, many financial advisors were telling investors to stay in the market in order to, eventually, benefit from an anticipated rebound. But that’s the world of investing. In the nonprofit world, this advice would prove to be nearly impossible to follow.

With a decline in the economy, giving also declined. Reduced funding meant that we had to take a hard look at our budgets and make some tough decisions.  Many nonprofits were forced to reduce staffing and resources for development operations.

According to the Giving USA report released last week, giving has finally surpassed the high from before the recession. When we’re working with clients, we’re seeing a renewed sense of optimism, and that’s exciting. But how can we make the most of this upward trend to strengthen our development programs and, ultimately, our organizations?

You may need a change in approach. In the recession, your organization may have been putting a focus on simply staying afloat rather than on growth. You may need to reassess your development program post-recession to determine what areas need improvement. If you made staffing cuts in the recession, now may be the time to “staff up” and expand your program. 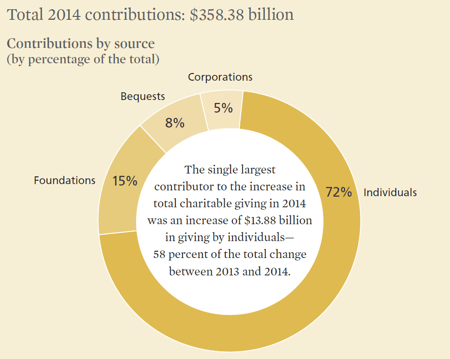 The Giving USA 2015 report confirms once again that organizations need to put the majority of their focus on individual giving. According to the report, individuals are, by far, the largest source of giving at 72%. If you add in the 7% of gifts given by family foundations and the 8% of gifts given by bequest, giving from individual donors ends up at around 87% of total giving. That would mean that individuals gave about $312 billion in 2014. That’s a significant number!

While this support from individuals comes through a variety of initiatives, including direct mail, telemarketing, and special events efforts, the vast majority of these gifts are the result of major and planned gift activity. If you’re looking to rationalize rebuilding or expanding your major and planned gift staffing, the Giving USA data supports it.

Many organizations set aside significant resources to “build the base” of support through special events and direct marketing. But once you’ve built a strong base, you need to be sure you’re taking those next steps to move a donor up the giving pyramid. This means having staff whose role it is to meet with donors face-to-face to discuss their philanthropic goals. It is important for organizations to invest in the resources necessary to develop a major and planned giving program in order to nurture donors and move them to a higher level of support.

The base you’ve built has already proven its affinity for your organization. The majority renew their support annually, and many frequently participate in your special events. Within this base are prospects that, with adequate resources for cultivation by staff and volunteers, will become your major and planned gift donors of the future.

The fact that giving is dominated by individuals is not likely to change. Planned giving as a source of individual giving is likely to increase its impact in the future. Organizations can position themselves for success by investing in major and planned giving programs.

Now that giving has returned to pre-recession levels, it is important that you invest in your fundraising strategy to strengthen your development program, and your institution, into the future. 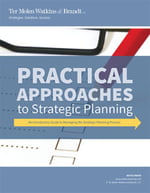 Good strategic planning is an extremely valuable management tool. The planning process allows individuals with a stake in the institution to investigate the purpose, status, and needs of the organization and determine the best course of action from each level of involvement.